As we have previously informed, the formal education of Tenga Rinpoche Yangsi had begun on the 16th of February, 2018 (the first day of the Earth Dog Year). That was a very auspicious day to start significant activities, according to the Tibetan calendar.

In spring, Khenpo travelled to Yangsi Rinpoche’s home village. It is a small settlement called Rö [Wylie: ros] near Samagaun in the northern outskirts of Nepal, in the vicinity of the eight-thousander Manaslu. Khenpo has spent several months there teaching Rinpoche the Tibetan alphabet.

Later on, in summer, Khenpo visited several Benchen Centers in Europe. He had also been invited to the Benchen Karma Kamtsang Centre in Grabnik, where he offered a series of talks during the summer seminar with Sangter Rinpoche. He also participated in the three-day long White Tara puja. Afterwards, he travelled to several local Benchen Centers in Poland.

Next year, Khenpo plans to first visit his home village, which is in the vicinity of Rinpoche’s birthplace and then spent few months with the young Tulku to continue the education.

While in Grabnik, Khenpo told us various stories about the new incarnation of his Guru, Tenga Rinpoche Yangsi. We wrote them down on the spot and we wish to share them here with you.

Yangsi Rinpoche is still very young and His Holiness Karmapa advised not to burden him with too intense education. Anyway, if the lessons are too serious and too long, Rinpoche refuses to cooperate further. Therefore Khenpo has been doing his best to make sure that reading lessons were in the form of games.

Rinpoche has an excellent memory and had reminded Khenpo about events he had long forgotten. He learned the alphabet quickly and since he loves to mimic Lama dances, he recites the syllables to the rhythm of the dance moves.

He is not interested in cartoons or other movies for children, however he can watch videos showing Dharma rituals for hours on end. He also enjoys watching films showing Khampa folk dances.

He has particular devotion for the Karmapa and Sangye Nyenpa Rinpoche. He often sings the mantra „Karmapa khyenno” or „Sangye Nyenpa, Sangye Nyenpa…” It happened that he took a pin with the image of His Holiness, which was worn by one of the visitors and didn’t want to give it back, repeating: „This is OUR Karmapa”.

Inspired by the Karmapa, the former Tenga Rinpoche had wished to give up meat. But his body, habituated to meat since early childhood, did not take it well. Every time he tried, he had such severe anaemia, that in order to be able to act for the benefit of others, Rinpoche had to return to a meat diet. However now, in his new incarnation, he persistently refuses to eat meat, although there is not much other food in the mountains and it is difficult to maintain a vegetarian diet.

When Rinpoche leaves his village, he is always glued to Tashi Oser. He does not want to sleep with his parents, only with Tashi Oser. Whenever he is out of his sight, Rinpoche immediately starts looking for him.

Previous Tenga Rinpoche had extremely valued Tashi Oser. Once in a conversation with His Holiness the Seventeenth Karmapa, Tenga Rinpoche, with great devoutness, requested the fulfilment of three wishes. First of all, he requested the Karmapa to live long for the benefit of all beings, then he asked His Holiness to pray for the long life of Sangye Nyenpa Rinpoche and… Tashi Oser.

He remarked then, that although he had been unable to move on his own (Rinpoche had been sick with diabetes for many years and towards the end of his life, he needed to undergo the amputation of both legs), he had still been able to fulfil various activities thanks to his wonderful assistant. 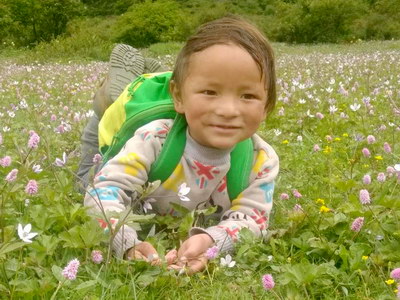