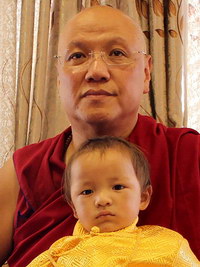 Since the official recognition of Yangsi Kyabje Tenga Rinpoche by His Holiness the 17th Karmapa Ogyen Trinley Dorje, the Benchen Monastery was preparing for his reception, but was awaiting the return of His Eminence Sangye Nyenpa Rinpoche from Bhutan. Finally, the date of the arrival of Yangsi Rinpoche to the monastery was set for the 9th of May 2017.

A day earlier, all monks from the monastery were invited to the Yak&Yeti Hotel for a gala dinner with Sangye Nyenpa Rinpoche and Sangter Rinpoche. The party was sponsored by nine lamas, heads of Benchen centres in different countries, including Lama Rinchen from our Polish Benchen Centre in Grabnik.

This was a double celebration: the first reason was the discovery of Yangsi Kyabje Tenga Rinpoche and his imminent arrival at the monastery, the second was the excellent performance of the monks from our Shedra (the higher school of Buddhist philosophy) at this year’s twentieth Kagyu Göncho in Bodh Gaya in India.

Kagyu Göncho is a series of debates organised by His Holiness Karmapa. It is attended by representatives of all Karma Kagyu shedras, therefore the competition is very fierce. This year, for the first time our monks from Benchen performed very well, taking the second place in the debates.

In the morning on the 9th of May, the monks together with the secular community of Benchen, each with a kathak in their hands, formed lanes on both sides of the path leading to the main entrance of the temple where Sangye Nyenpa Rinpoche and Sangter Rinpoche were waiting. According to the Karmapa’s instructions, no large ceremony was planned. Yangsi Rinpoche was greeted according to the custom first by Sangter Rinpoche and then by Sangye Nyenpa Rinpoche with a traditional touching of foreheads.

Then, both Rinpoches, drubpön, lobpön, all khenpos, monks and the lay community of Benchen took their seats in the temple. Khenpo Gawang, designated by the Karmapa as the head of the search team, once again, vividly told the story of the search for Yangsi Rinpoche. To sum up, he concluded that the whole process was very auspicious and offered a letter from His Holiness the Karmapa announcing that this was the unmistaken reincarnation of Kyabje Tenga Rinpoche.

Then, His Eminence Drubwang Sangye Nyenpa Rinpoche took the floor, thanking Khenpo for his effort and dedication with which he fulfilled his task. He also said that while not being able to fully repay His Holiness the Karmapa for his extraordinary kindness and help, in a few days the monks from the Benchen Monastery and Shedra would perform the week-long ritual of Tsedrub Sangwa Döpa. It is an elaborated long-life puja and will be dedicated to the long life and flourishing of the activities of the Karmapa. The already mentioned lamas from Benchen centres worldwide have also donated money to cover the costs of food for the lamas participating in the practice.

Following the speeches, the monks recited the puja of the Sixteen Arhats, and Sangye Nyenpa Rinpoche, on the advice of the Karmapa, performed the cleansing ritual (tröchok) for Yangsi.

According to the Tibetan tradition all present were offered tea and sweet rice, followed by a ceremony of offering the mandala. The Mandala of the Universe was offered to Yangsi Rinpoche by Drubwang Sangye Nyenpa Rinpoche, while the symbols of Body, Speech and Mind of the Buddha were offered by Tenpa Yarphel, Tashi Öser and Dorje Lobpön, respectively. At this time, around the sun in the sky appeared a rainbow, which is considered a very auspicious sign.

During this time all the participants of the ceremony were offered lunch by the Monastery.

More photos in the Gallery.