As we all remember, His Eminence Drubwang Sangye Nyenpa Rinpoche sponsored the great Buddha statue for our temple in Grabnik – its making and transportation to Poland, as well as performed its consecration. In his great kindness, in Autumn 2015, Rinpoche also promised to order in Nepal and send to Grabnik additional elements: ornaments for the granitic pedestal, canopy over Buddha’s head, brocade ornaments for the pillars and additional statues which should be placed next to Buddha: Shariputra and Maudgalyayana – presented as standing monks. Both statues are about two metres high. They will look exactly like those from Benchen Shedra (pictures below).

The promised brocades were brougt to Grabnik by Lama Rinchen in Spring 2016 and, apart from the canopy, hang already in the temple (picture above). On the 26th of July His eminence Sangye Nyenpa Rinpoche informed Lama Rinchen that both statues had been ready and soon would be sent to Poland, together with the ornaments for the Buddha’s throne.

On the 3rd of August 2016 statues and ornaments arrived safely at Grabnik Centre. We face again some works by setting the statues as well as by the mantras needed to fill them. We would like to start preparations soon. 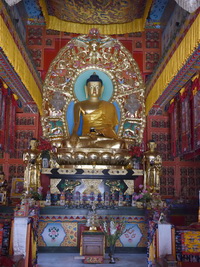 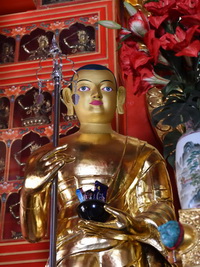 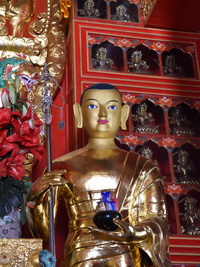