From left: Rinpoche's robes, Stupa housing Rinpoche's relics at Benchen Grabnik, a miniature statue in the likeness of Rinpoche.

In the spring of 2018, Benchen Monastery, Nepal offered the Centre a statuette in the the likeness of Kyabje Tenga Rinpoche. It is a miniature replica of the original statue that contains the main relics of Tenga Rinpoche, which is in the Tara temple in the old Lhakang in Kathmandu.

Following is the story behind the remarkable way Rinpoche passed away, the relics he left behind, and how they were allocated.

Kyabje Tenga Rinpoche passed into Parinirvana at the age of 81, on the morning of 30th March 2012. He remained in a post-mortem meditation called Thugdam for three and a half days (exactly 108 hours). His Eminence Tai Situ Rinpoche said that: "Tenga Rinpoche had departed in the same way as all the great Kagyu masters,  sitting in an upright position in deep meditation which he maintained even after death."

After all the traditional rituals had been carried out in accordance with the recommendations given by the Seventeenth Karmapa, Ogyen Trinle Dorje, the precious kudung of Kyabje Tenga Rinpoche was ceremonially cremated. The ceremony began on 23rd May at 7 a.m. Nepali time in Kathmandu. It was presided over by Tsikey Chokling Rinpoche, Chokyi Nyima Rinpoche, Tulku Damcho Rinpoche, and Lama Tsultrim Rabten, the Venerable Vajra Master from Benchen Monastery.

During the rituals many Rinpoches, Tulkus, Lamas and representatives from many monasteries and Buddhist organisations payed their respects to Tenga Rinpoche’s kudung. The ceremony was attended by the Honorary Consul of the Republic of Poland in Nepal, who also represented the Polish embassy in India. On behalf of the Polish sangha, Lama Rinchen received also a letter of condolence sent from the Embassy.

At the completion of the ceremonial puja prayers, and according to tradition, the crematory stupa, or purkhang, was then sealed and remained closed for a week.

When the cremation stupa was opened after seven days, everyone was amazed at how many valuable relics Rinpoche had left as a sign of blessing and an ongoing source of inspiration for his disciples.

The most significant were his heart and tongue, which remained as symbols of his incomparable compassion and indefatigable teaching activity. He also left a large fragment of his skull, the entire length of his spine, and numerous remains of smaller bones. Gradually, valuable relic pills, called ringsel in Tibetan, began to appear among the ashes. They arise spontaneously only in the case of eminent masters who have achieved deep realization. It is said that when students have pure devotion to the Lama, the pills spontaneously multiply.

The relics have since been allocated following the advice of His Holiness the Karmapa,. The heart and skull were placed in the statue that was made into the likeness of Rinpoche, which is now located in the Tara Temple in Benchen Monastery in Kathmandu. A 1.5-meter stupa is also in the same room, into which the majority of the remaining precious relics, including the main bone fragments, were placed.

The construction of this stupa had already been discussed and approved by His Holiness Seventeenth Karmapa a few years earlier during one of Kyabje Tenga Rinpoche’s many visits to give teachings to His Holiness at Gyuto Monastery in India. It is called 'Jangchub Chöten,' which means "the Stupa of Awakening," and was designed according to the proportions and guidelines of the Fifteenth Karmapa, Khakhyab Dorje.

Numerous tsa tsa were made from the smaller fragments of bones and ashes which remained after the cremation, and these were placed in the second memorial stupa. Three-storey's high, it was erected in front of the three year retreat centre, Naro Drubkang, at Benchen Drubde Osal Ling, in Pharping, Nepal.

It is called 'Lha Bab Chöten,' which means "the Stupa Commemorating the Descent of Buddha Shakyamuni from the Heavenly Realm, Tushita." Inside the stupa itself, there is a square room large enough for visitors to circumambulate the three-dimensional White Tara mandala housed there. The walls are decorated with paintings depicting various aspects of Tara, and murals also show the lineage of both Sangye Nyenpa Rinpoche and Kyabje Tenga Rinpoche’s previous incarnations. These two stupas were constructed along the lines of the Drime Namnyi tradition.

Some of the relics were also donated to Rumtek monastery in Sikkim, where Kyabje Tenga Rinpoche served for many years as the Vajra Master during the time of the Sixteenth Karmapa. The rest of them were distributed among Kyabje Tenga Rinpoche's centres around the world. And in this way, some of these precious relics also arrived in Poland. 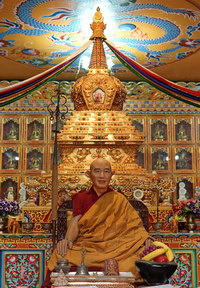 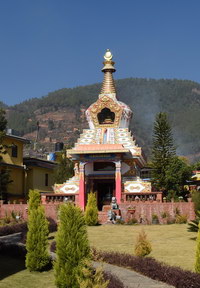 THE JOURNEY OF THE RELICS TO GRABNIK

The day following Rinpoche’s cremation, the Benchen Monastery Administration Committee invited a group of Polish students to a meeting and ceremonially offered Lama Rinchen a set of Tenga Rinpoche’s robes. They have now been placed in the temple at Benchen Grabnik as a sign of remembrance, and as an object of worship.

Poland also received five of the spontaneously arising ringsel relics, which were presented to us by Jinpa Lodro, vice-chairman of the committee and one of Rinpoche's closest disciples. This particular ceremony took place on the 31st August 2012, which was an auspicious day according to Tibetan astrology. The presentation was also attended by the Venerable Sangter Tulku Rinpoche, Lama Rinchen, Lama Mingyur Sonam, Lama Sherab Wangchuk, other lamas, monks, nuns, Grabnik residents, and numerous students of Rinpoche.

A construction site designated for the location of a memorial Stupa was consecrated by His Eminence Drubwang Sangye Nyenpa Rinpoche close to the newly erected Lhakang. Then over the next few years, a seven-meter stupa was built at the Centre in Grabnik. Rinpoche's relics were placed inside it, including numerous tsa-tsas which also contained his relics. When the container holding the ringsels was opened in preparation for placing them inside the stupa, remarkably they had in fact doubled in number. In addition the stupa houses many valuable relics of forefathers of the Kagyu Lineage and other great masters.

Whilst making Kyabje Tenga Rinpoche’s main statue in Nepal, which holds his heart and skull, as already mentioned, a few additional smaller statues were ordered. In the spring of 2018, during the great Nying Thik transmission bestowed by His Eminence Drubwang Sangye Nyenpa Rinpoche, Chakje Tashi Oser offered one of these smaller statuettes to the Benchen Center in Grabnik. This replica is about 25 cm high and has now been, placed on the shrine in the temple along with  Rinpoche’s robes.

In this way, these valuable relics, have become an object of worship at Benchen Grabnik, which you can visit. One of the benefits of having them here is that anyone can accumulate merit by making prostrations and offerings to them, as well as receiving the ongoing blessings of our beloved Lama, Dorje Chang Kyabje Tenga Rinpoche from them. Rinpoche left these relics behind out of his great compassion to remind us that his blessing is always with us, that he still cares for us, and that even now he is looking after us.

It is for the same reason of benefiting us and all sentient beings that Rinpoche has now returned as the 4th incarnation of the Tenga Tulku. We eagerly await the time when he will be able to visit us here again and in the meantime we are all doing our best to carry out the instructions and advice he gave us in his previous incarnation as the 3rd Tenga Rinpoche.