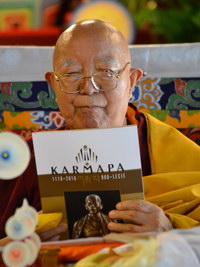 2010 marked 900 years from the birth of the first Karmapa, Dusum Khyenpa, the founder of the Karma Kagyu school of Tibetan Buddhism. The entire period between 8 December 2010 and 27 December 2011 is devoted to the celebrations of 900 years of the Karmapa lineage.

In Poland, as agreed with Rinpoche, the ceremony was planned for the third day of Kagyu Monlam. The day before, also on the occasion of the Karmapa 900 ceremony, Very Venerable Tenga Rinpoche bestowed Karma Pakshi empowerment. Each participant received a copy of the “Karmapa 900” book in Polish.

On the day of the ceremony the Dusum Khyenpa statue was introduced in an official procession, and then Tenga Rinpoche personally offered it a mandala of the universe and the symbols of Buddha’s Body, Speech and Mind. Later, Rinpoche, as the official representative of His Holiness Karmapa appointed to conduct the appropriate ceremonies in Poland, delivered a speech. 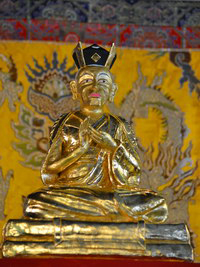 After a break, everyone participated in an offering feast – tsok, reciting the Dusum Khyenpa Guru Yoga text, composed especially for this occasion by His Holiness the 17th Karmapa Ogyen Thinley Dorje.

Then Rinpoche thanked all the sponsors and individuals, who with their efforts support the Grabnik Centre, which Rinpoche recognized as equivalent to his official European headquarters in Allmuthen.

On this occasion he donated a set of brocades, two gilded incense burners and all other equipment needed for solemn processions. Special thanks went to two sponsors owing to whom an opportunity arose to build a new prayer hall and an all-year kitchen with a dining hall in the Centre. Rinpoche underlined that participation in both of these construction projects gave everyone the ability to collect vast merit.

Rinpoche had mentioned both projects already during the seminar, but at that point he delivered a speech which touched all students, predicting that the temple, which would be created here owing to the efforts of all our sangha, will last throughout kalpas, bringing immeasurable benefits and serving the flourishing of Dharma.

The last day of the Monlam traditionally ended with the Lamp Prayer. Starting from the candle lit by Rinpoche, all the participants lit their lights, and singing “Karmapa khyenno” marched around the entire Centre with them.

At the end, the burning candles were placed around the Karmapa’s flag in the middle of the front yard, and right under the flag, monks put them in the shape of the Kagyu Monlam symbol.