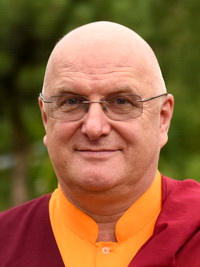 Lama Rinchen (Waldemar Zych) has been practicing Dharma since late seventieth. He has travelled extensively to Western Europe and Asia to study the teachings and practice in Buddhist centres. In 1985 he became a disciple of Venerable Tenga Rinpoche and under his direction he spent four and half years in meditation retreats. He was a monk for ten years. His other main teacher is His Eminence Sangye Nyenpa Rinpoche.

Lama Rinchen has been a Buddhist teacher for many years. Ven. Kyabje Tenga Rinpoche has appointed him as the president of the Benchen Karma Kamtsang Buddhist Association in Poland and has made him a lama-resident of the Centre in Grabnik, which is a Polish branch of the Benchen monastery. In the Centre in Grabnik he regularly leads meditation seminars and classic texts studies. He also provides instructions for people meditating in retreats. Lama Rinchen also regularly teaches in other Kagyu centres in Poland and in other countries. He is authorized to conduct empowerments (tib. wang) to Vajrayana practices. Lama Rinchen has been appointed by HE Sangye Nyenpa Rinpoche and Kyabje Tenga Rinpoche as a teacher guiding the 3-year retreat centre, where future lamas are getting training.

As a sign of appreciation of his vast activity for spreading out Dharma and especially Teachings of Kagyu Practising Lineage, Ven. Kyabje Tenga Rinpoche has honoured Lama Rinchen by offering him a "Hat Of The Knowledge Holder" (Tib.: Rigdzin Cho Sha, sanskr.: Vidyadhara-charya-mukut). During the summer course in 2010 in the Centre in Grabnik Venerable Tenga Rinpoche said:

"I would like to say a few words about Lama Rinchen who is the resident Lama in this centre. He is a very good practitioner. Especially important is his motivation, which is giving himself to altruistic reasons. Thanks to this good Bodhisattva motivation, he brings benefit to many beings. His activity helps to spread the Buddha Teachings and, especially, leads to preservation and spreading of Karma Kamtsang Lineage. That’s why I regard him as a person of a great Dharma activity.

Lama Rinchen, with his pure motivation, not only devoted himself to work for this Dharma-centre, but also tirelessly travels to other Dharma-centres in order to help the practitioners in Poland and other countries. He helps many people by showing them the authentic Dharma path and giving them the proper teachings. That’s why I’m assured that it is right and appropriate that I will offer him the mandala of universe and the symbols of awakened body, speech and mind.

I will also give him this hat, called Rigdzin Che Sha, which means the Hat of the Conduct of the Knowledge Holder. In the Nyingma Tradition great lamas use this hat giving empowerments or special teachings. It is used by Lamas of great activities who are exceptional practitioners. That’s why I request Lama Rinchen to wear this hat during official ceremonies, giving empowerments and special teachings. I also give him this yellow shawl which he should use, as a layperson, instead of monk Dharma robes".

Lama Rinchen was appointed by both Rinpoches as a teacher of this three-year retreat centre (see the letter).

Our Polish Lama Rinchen, is truly done 3-year retreat, qualified both rituals and practices and we asked him to teach Dharma in Europe and particularly in Poland. He is trained very well all our traditional practice under our guidance and instruction during his retreat and generally each and every time he visits us. Therefore, he could direct and lead all Dharma practices here in West, particularly coming 3-year retreat in Grabnik, Poland. We trust him completely in this matter.

Therefore, our Dharma brothers and sisters and practitioners can trust him as true guide and teacher. We wish and pray for all the best to all of you,