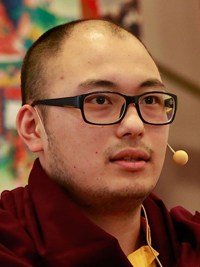 The previous incarnation of Kalu Rinpoche (1905-1989) was one of the greatest contemporary Tibetan Buddhist meditation masters. He was born and taught in Tibet. He received Dharma teachings from the utmost masters including the 15th Gyalwang Karmapa and the 11th Tai Situpa. For many years he pursued the life of a solitary meditator and devoted himself particularly to the practice of Shangpa Kagyu.

He was one of the first Tibetan masters to teach in the West in early 1970s. Owing to his endeav-ours, numerous Dharma centres were established in Western Europe and Northern America where the Rinpoche gave empowerments and teachings. He has also founded the first in Europe Shangpa Kagyu three-year retreat centre in France. Those who had the opportunity to meet the Rinpoche in person, affectionately say he radiated with unusual goodness and compassion, and the depth of his realization made him an embodiment of the Refuge.

The living incarnation of Kalu Rinpoche was born in 1990 in his Samdrub Darjay Choling monastery in north-eastern India. He was officially recognized as Kalu Rinpoche's incarnation by His Holiness The Dalai Lama and Tai Situ Rinpoche. The enthronement ceremony took place in 1993.

At the age of seven, Kalu Rinpoche Yangsi started formal studies under the guidance of venerable Bokar Rinpoche. When he was fifteen, he started his three-year retreat which he finished in 2008. For few years Rinpoche has been teaching in the Dharma centres all over the world. The combination of his Buddhist education and great knowledge on the culture and mentality of the West, together with fluent English, helps Rinpoche to have a direct contact with the listeners and pass them the crucial teachings in clear, understandable way.