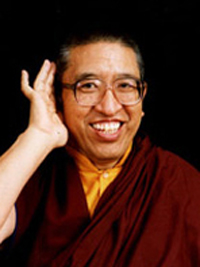 The Venerable Khenchen Thrangu Rinpoche was born in Kham, Tibet, in 1933. At the age of five, he was formally recognized by His Holiness the Sixteenth Karmapa and Tai Situpa as the ninth incarnation of the great Thrangu Tulku.

Because of his great scholarship and unending diligence, he was given the task of preserving the teachings of the Kagyu lineage; the lineage of Marpa, Milarepa, and Gampopa, so that one thousand years of profound Buddhist teachings would not be lost. He was named Abbot of Rumtek monastery and the Nalanda Institute for Higher Buddhist Studies at Rumtek.

First Rinpoche founded the small monastery of Thrangu Tashi Choling in Boudhanath, Kathmandu, Nepal. Then he completed many other projects, like a retreat centre, a college, a nunnery or the Vajra Vidya Monastery in Sarnath, India.

Thrangu Rinpoche is a recognized master of Mahamudra meditation. He is especially known for making complex teachings accessible to Western students. He was giving teachings in Europe, Asia, United States and Canada.