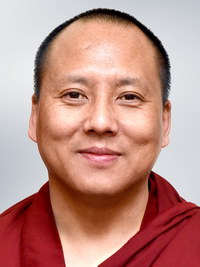 Venerable Sangter Rinpoche was formally recognized as a Tulku from the Nyingmapa tradition, but he studied and completed the three-year meditation retreat in Benchen Monastery in Nepal.

Although he is responsible for his own monasteries in Sikkim, in appreciation for his dedication in working for Benchen community, Sangye Nyenpa Rinpoche and Kyabje Tenga Rinpoche, consider him a Rinpoche from Benchen monastery.

Venerable Kyabje Tenga Rinpoche recommended fully Sangter Tulku Rinpoche as a Buddhist teacher, underlining that we can rely both on his education and his meditation experience. During the summer course in 2010 in the Centre in Grabnik Rinpoche said:

"When Sangter Tulku Rinpoche reached the age of seventeen or eighteen, he was with His Eminence Chadral Rinpoche. At that time, Chadral Rinpoche made a prophesy for him, by saying: 'it would be a great benefit for your future if, for your further education, you go to Benchen Monastery'.

So then, around the age of seventeen or eighteen, he went to Benchen Monastery and entered this tradition. He started studying all the necessary monastic rituals and other things. Eventually, he went to the three-year retreat centre in Benchen Retreat Centre known as Benchen Drubde Osal Ling. He did the three years and seven-months intensive retreat.

I consider him as a very good practitioner. During his three-year retreat he definitely managed to gain excellent experiences and realization. Specially, Sangter Rinpoche loves me very much. He has given all his heart to me and I always consider Sangter Rinpoche as one of the tulkus, one of the Rinpoches of Benchen Monastery".