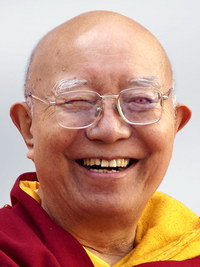 The 3rd Kyabje Tenga Rinpoche was born in eastern Tibet in 1932.  When he was eight, he was recognized as tulku and was named Karma Tenzin Trinley Namgyal.

In the Benchen Monastery Rinpoche received broad education on rituals, philosophy and medicine and at the age of twenty he became a fully ordained monk and started three-year retreat. After that he became a teacher in the monastery. He chose White Tara as his main Yidam and became an accomplished master of this practice.

As a consequence of Chinese invasion in 1959, Rinpoche had to emigrate to Rumtek. In 1967 he was appointed by His Holiness the 16th Karmapa as Dorje Lobpon (Wajra-Master) of Rumtek Monastery, and hence a main Dorje Lobpon of all Karma Kamtsang school.

Later, His Holiness asked Rinpoche to become also his official representative for South-East Asia and to take care of Karma Kagyu Dharma centres there.

In 1976 Tenga Rinpoche settled down in Kathmandu (Nepal) where, at the foot of the Svayambunath Stupa, he established the Benchen Monastery in exile.

In 1979 Rinpoche started visiting Kagyu centres in the West regularly. His deep knowledge on each area of Buddhism, his experience as a Dharma master, understanding of our western life styles and tireless willingness to support every sentient being with love and compassion are the reasons why many western students started relying on him as a spiritual teacher. 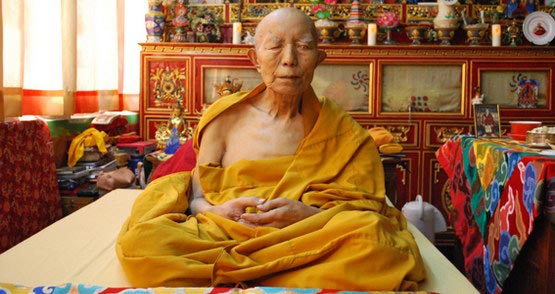 Despite his increasingly advanced age and chronic illness, Kyabje Tenga Rinpoche tirelessly travelled, lectured, gave advice and blessings to his students till the end of his life. In spite of the great physical pain he experienced, he thought only of the benefit of others.

When his body was no longer able to cope with this task, Rinpoche calmly handed over all the important things to his assistants, fixed the details of his funeral, and began to say goodbye. Asked how and when to start looking for his next incarnation, he replied categorically: "Ask His Holiness the Karmapa! His instructions will be completely clear."

Kyabje Tenga Rinpoche passed into paranirvana at the age of 81, in the early hours of the 30th of March 2012. After passing away, he remained - like many other masters - in a state of post-mortem meditation called Thugdam, which in his case lasted three and a half days, exactly 108 hours. As his Eminence Tai Situ Rinpoche put it, "He passed away in the way of all great Kagyu masters, in deep meditation, sitting in the upright position, his body remaining like that even after it had expired.

This time when a lama remains in post-mortem meditation, is considered to be special and his body is called a kudung. The students then pray with particular dedication to their Guru, and as much as possible they perform the meditation he taught them.

After practicing all the traditional rituals that were conducted according to the instructions of His Holiness the 17th Karmapa Ogyen Trinley Dorje, the precious kudung of Kyabje Tenga Rinpoche was cremated on May 23, 2012, according to his wishes. The ceremony was lead by Tsikey Chokling Rinpoche, Chokyi Nyima Rinpoche, Tulku Damcho Rinpoche and venerable Vajra Master from the Benchen Monastery Lama Tsultrim Rabten.

During the ritual many Tulkus, Rinpoches, Lamas and representatives of monasteries and Buddhist organizations approached to pay their homage. The ceremony was also honoured by the presence of the Honorary Consul of the Republic of Poland in Nepal, representing the Polish embassy in India. The Embassy also gave a letter with condolences to Lama Rinchen. According to tradition, the cremation stupa (purkhang) was then sealed and remained closed for a week.

The next day after the cremation, a group of Polish students were asked to go to Rinpoche's room in the morning, where the administration of the Benchen Monastery ceremonially offered them a set of robes used by Rinpoche, which are presently an object of worship at the Benchen Centre in Grabnik.

When the cremation stupa was finally opened, everyone was amazed at how many precious relics Rinpoche left as a sign of blessing and a source of inspiration for his old and new students. First of all, it was his heart and tongue, as symbols of his incomparable compassion and tireless teaching. He also left us a large piece of his skull, the whole spine and many smaller bones. Gradually, in the ashes there also began to appear valuable pill-relics, called in Tibetan ringsel. They are formed in the ashes themselves and appear only in the case of outstanding masters who have achieved profound realization.

According to the advice of His Holiness the Karmapa, Rinpoche's heart and skull were placed in the statue resembling Rinpoche. The statue was installed in Tara shrine, in the monastery in Kathmandu, in front of a half-meter stupa, where most of the precious remains were located, mainly including bone fragments. The second, large three-storey stupa, with a three-dimensional White Tara mandala inside, was erected in Pharping. It houses numerous tsa tsa made from the smaller fragments of bones and ashes remaining after cremation.

Some relics have also been offered to Kyabje Tenga Rinpoche centres around the world. Precious relics are also in Poland. A special seven-meter stupa was created in the Centre in Grabnik, where the ringsels and other relics of Rinpoche and many of the Kagyu Lineage forefathers and other great masters were placed. Relics were also received by representatives of Benchen Karma Kamtsang city centres in Poland, recommended to be placed on the altar in lhakang, preferably in a small stupa.

The precious relics are now the object of worship, thanks to which we can accumulate merit by offering prostrations and various gifts, as well as receive the blessing of our beloved Lama, Dorje Chang Kyabje Tenga Rinpoche, who in his great compassion left them behind to remember that he is still with us, he cares about us and surrounds us with care. 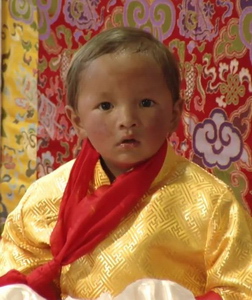 On the 21st of March 2017, His Holiness the 17th Gyalwang Karmapa has officially recognised the new incarnation of Kyabje Tenga Rinpoche.