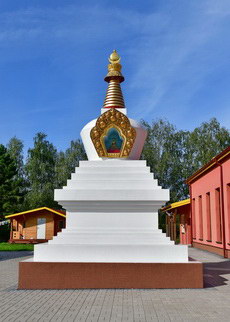 Kyabje Tenga Rinpoche, our precious Teacher, passed into Parinirvana in the spring of 2012. He remained in the post-mortem meditation called Thugdam for 108 hours (four and a half days).

Out of his great compassion, Rinpoche left particularly precious relics after the cremation of his body, so that we remember that he still is with us, cares for us and guards us. His heart, tongue and a part of spine were found intact and were later put inside Rinpoche's statue in the monastery. It is said that if a master, after his cremation, leaves the heart (symbol of mind), tongue (symbol of speech) and symbols of body untouched by the fire, which happens very rarely, it is a sign of his unusual, immense compassion.

Other relics were placed in stupas built especially for this purpose in Benchen monastery in Kathmandu and in Parping. Part of the relics were presented to the monastery in Rumtek, where Tenga Rinpoche presided as Vajra Master for many years. Yet another part was offered to various Benchen centres worldwide, including our Benchen Karma Kamtsang Centre in Grabnik.

Kyabje Tenga Rinpoche's relics were brought to Grabnik in August 2012. In order to preserve them in a respectful manner in a place where Rinpoche's students would be able to pay homage to them, we constructed the proper stupa to contain them. It is about 7.5 metres high.

THE BENEFITS OF BUILDING A STUPA

The benefits of building stupas are countless. They are mentioned in both sutras and tantras. The texts promise long life in health and prosperity, good future rebirth and swift Enlightenment.

You can find more information in articles on the benefits of building stupas and paying homage to them.

STAGES OF BUILDING STUPA IN GRABNIK

In August 2013, His Eminence Drubwang Sangye Nyenpa Rinpoche set out the site for the stupa and carried out the ceremony of consecrating the ground for construction (sa chok in Tibetan).

Since the spring of 2015 the stupa has been growing rapidly. Thanks to the enormous support of our Buddhist community, we were able to prepare the numerous substances and materials necessary to fill this sacred edifice, such as a set of the holy texts of Kangyur and Tengyur, several vases of the Earth Goddess and Nagas, scrolls of appropriate mantras, a sok-shing (the "Tree of Life"), which constitutes the core of the stupa and over 2,000 tsa-tsa containing the relics of Kyabje Tenga Rinpoche.

In order to make sure all works were conducted in accordance to traditional Dharmic procedures, Lama Gelek Paljor - the assistant of Kyabje Tenga Rinpoche for many years, supervised them. Despite his ailing health, he has continuously served us as an example and an inspiration through his joyful efforts and devotion.

Khenpo Osung - the main khenpo of Benchen monastery in Kathmandu - and Lama Rinchen, consecrated the tsa-tsas, mantras, texts, vases and other objects. Other Tibetan and Polish Benchen lamas also attended the ceremonies.

All of the objects were placed in the respective levels of the stupa according to proper rituals and procedures. Then a round concrete bumpa (vase) and a few of the 13 rims at the top of the stupa were made. On the 15th of November 2016 we placed "the tree of life" (sok-shing in Tibetan) with Rinpoche's relics.

The next stage of works was applying the remaining thirteen circles on the top of the stupa as speckling the whole stupa. Meantime in Nepal, metal ornaments were ordered and transported to Poland in Spring 2017, where they were later gilded. At the end of August, the circles on the top of the stupa were painted, gilded and traditionally crowned with a sun and a moon.

In autumn 2017, it was possible to put the first layers of paint on the stupa as well as harden and pave the surrounding area. In June 2018 a gilded embellishment was mounted around the window in the bumpa.

The consecration ceremony was held by Sangter Rinpoche, Khenpo and Benchen lamas on the 19th of August 2018. 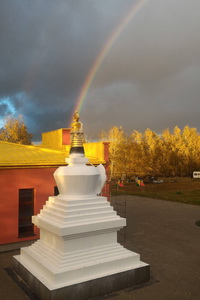