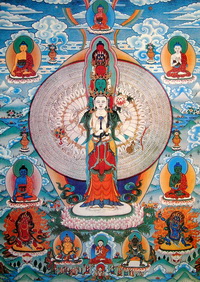 Nyungne is a practice of Yidam in kriya tantra tradition. It purifies a lot of negative karma in a short time. It is said that a clear practice of one Nyungne closes the gates to being reborn in lower realms. The same, clear practice of eight Nyungne leads to rebirth in the Pure Land of Dewachen.

Nyungne is a fasting meditation retreat combined with the intensive practice of 1000-Armed Chenrezig. First day only two, so-called "pure", meals may be eaten and during the second day completely nothing may be eaten or drunk. On the second day one should also stay completely silent. During the whole time of the retreat it is obligatory to adhere to Mahayana sojong vows.

Each Njungne ends on the third day with a morning session.

On Monday October 26th, in the morning - Milarepa tsok puja (tsok puja is not an integral part of Nyungne but is usually done as a concluding practice).

Each Nyungne is a complete whole, so one can take part in one, several or all eight Nyungnes. First time practitioners are encouraged to choose the first Nyungne, because the explanations for the meditation will be given then.

Registration deadline - till the 5th of October. Minimum 35 PLN of prepayment for each Nyungne is required.

Registration can be completed using the registration form. All changes considering your registration should be submitted at least three days in advance.

If you take part in more than one Nyungne, suggested donation for every next one is 70 PLN.

BONUS: all eight Nyungnes (16 days) = 480 PLN
Bonus is for those who will take part in the whole seminar and register and pay the whole amount by the 5th of October.
Note: Those who resign from some parts of the seminar cannot use the bonus.

Buddhist Benchen Centre in Grabnik is maintained exclusively by donations, therefore each, even very symbolic amount, is important and appreciated. Those who would like to support us, may do it by transferring donation to our bank account or with a use of a debit card (see donate).

In case you have any further questions or are not able to cover the whole suggested donation, please contact us.

back to Upcoming events